Replacing a flakey keyboard in a MacBook Air A1466

Competition for tech repair in Guelph is fierce.  The work flow of late has been slow, and the days long and fruitless.  Thankfully an old regular brought in a job to break up the monotony, and a rather involved one at that.

A few of the keys on the keyboard of his MacBook Air A1466 have been less than fully responsive, which is an annoying thing in a keyboard.  Cleaning and reseating the internal connections hadn’t resolved the issue, so the next step is to slap on a new keyboard and see what happens. 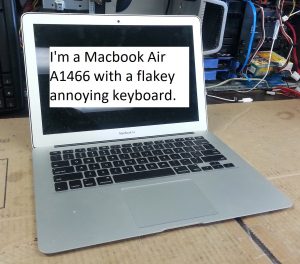 The first step is the remove the bottom cover, then remove the battery, and then connect the new keyboard for testing.  It is highly recommended not to skip this step, because in order to install the new keyboard, the entire machine gets disassembled.  Sometimes new parts don’t work right, and it’s best to discover that at the start of the repair, rather than the end.  Trust me. 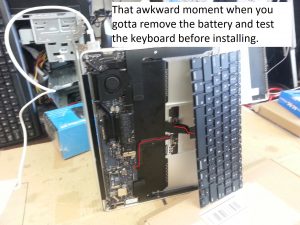 It’s a bit awkward to test the new keyboard.  The ribbon connector plugs into the trackpad, which then has a separate ribbon connector which goes back into the motherboard.  I prefer to do my tests in this position, with a small box underneath the keyboard for support.  This allows for the computer to be powered up and the keys to be tested in the operating system.

Thankfully every key seems to be 100% responsive.  Now it’s time to move onto removing all the internal hardware, then removing the old keyboard.

MacBook keyboard replacements have been large, user-unfriendly jobs ever since the unibody aluminum-style of body was introduced back in the late part of the last decade, and have been getting steadily worse.  Originally the keyboards used to be held in entirely by little screws.  Then they moved to the keyboards only having screws around the outer ring, with the rest of the board being riveted to the frame.

This is annoying for two reasons.

1 – It requires you to man-handle the keyboard to tear it out when it needs to be replaced.

2 – It prevents a new keyboard from ever being able to fit as snug against the frame as the original. 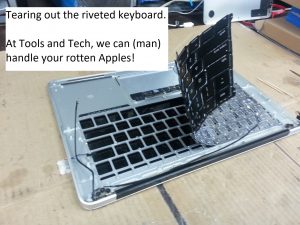 The keyboard will still sit OK and work normally, but will never feel 100% like it was before the repair.  This is not the case with models where the entire keyboard is screwed into place.

The new “butterfly” style keyboards in Apple’s latest MacBooks are more prone to failure and even harder to replace.  Apple’s contempt for repairable electronics knows no bounds. 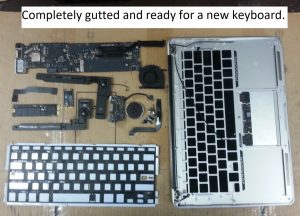 With everything hollowed out of the body, it is now time to install the new keyboard and reassemble the internal computer hardware. 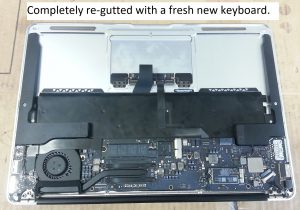 With the new keyboard installed and all the computery parts put back in, it’s time to reinstall the battery and do our final keyboard tests. 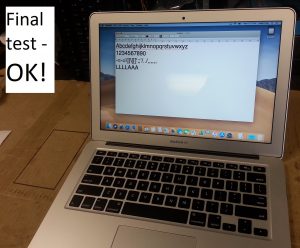 Hopefully we can squeeze a few more years out of this little MacBook Air.  And remember, at Tools and Tech, we can handle your rotten Apples!

Thanks bunches for reading!