My Afghani buddy Noor has a grandchild who was a little rough with their cheap little Samsung Galaxy Tab A Android tablet when trying to plug it in to charge.

The result?  A badly buggered USB port, which renders the device useless.

“Can you fix?” he asked me one night during one of our regular Afghani dinner parties.

So after about a week of waiting on a replacement charging port to come through the mail, it finally arrived today, courtesy of the good folks over at Tablet Parts Canada, in a town called South Porcupine here in Ontario (of which I had never heard until ordering this part).

The first step is pulling apart the device, which isn’t too difficult for this model.  A simple plastic spudger, or even a strong set of fingernails, will do the trick.

Then it’s a matter of removing the board to get at the USB port.  Once the board is out, all it takes is about 20-30 seconds of hot air being blasted at it from the bottom to liquefy the solder and allow the port to be removed. 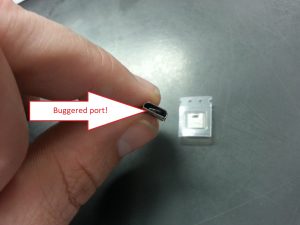 After removing the old port with the hot air, the new port was places overtop and again the hot air did the job of liquefying the solder and getting the port to drop into place properly.

Then I used a trick I learned from Sorin the Romanian on his Electronics Repair School YouTube channel.  Instead of using flux to help the solder flow from the soldering iron onto the connectors and pads, just dip the soldering iron directly into the rosin (Sorin recommends one called Kolophonium) and dab it onto the area to be soldered before doing the soldering.

Then it’s just a matter of soldering the pins to the pads, and tah-dah!  A brand-new port looking just like new! 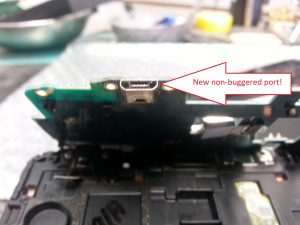 Then comes the moment of truth.  After putting the board back into the body and reconnecting the battery, we hook it up to the AMP meter and see if we get a charging symbol.

Hopefully Noor’s little grandchild will take better care of it the second time around.

If you have a little one who has buggered up the USB port on their tablet, make the trek to Tools and Tech, and hopefully we can save it from the scrap heap for at least a little while longer.